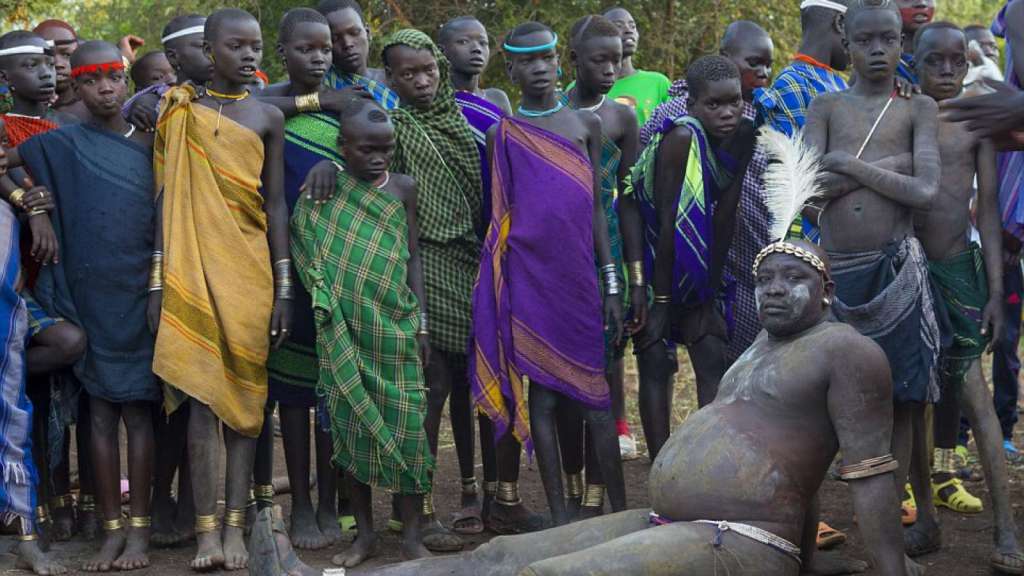 Bodi tribe of Ethiopia that believe being bigger is better

by: Jonathan Africa‚ Culture‚ Ethiopia‚ People of Africa Comment off

In Ethiopia there are number of communities with interesting as well as you can say, primitive cultures.

The Bodi lives in the remote corner of Ethiopia’s Omo valley,

For the Bodi or Me’en people of Ethiopia being fat is a competitive event. This ritual sees young men take honey, cow’s blood and milk in a bid to be crowned the fattest man. There are benefits of becoming fat, those are; you’re chosen and honored to organize events and getting the freedom to marry the most beautiful girls.

Bodi men wander around naked or wearing just a cotton bandage around their waist.

The economic activities of Bodi people is keeping livestock. When a child is born into the family, that child is given presents by father usually ox and a cow. Like many African communities, the dowry of a woman is cattle.

The father gives ten cows to his son as a dowry, a total of 30 to 60 cows are given to the family of bride as a dowry. From them, a bride is given three female cows to gift her husband.

Bodi people are sociable and welcoming to strangers.

The traditional chief Komoro, is the leader and presides over most of the functions revolve around the community. The position of Komoro is hereditary where the eldest son is chosen as successor when chief dies.

Every year in June or July, the Bodi celebrate the ‘Kael’ ceremony which mark the start of new year. To participate, only unmarried men are sent from each household. These men are fed with blood, milk and sometimes honey for several months to increase weight. Women from competitor’s home bring a mixture of cow’s blood and milk in a bamboo pot. During this time the bodies of these men are covered by mud and ash.

Cows are considered very sacred in Bodi culture and therefore they are not killed in such whole events but the blood is extracted from the vein. After that the wound is filled with the help of soil.

The cow is killed on the day of ceremony which is set by Komoro assisted by elders. The day is determined based on the position of moon.

The winner of the contest is made famous in the tribe. At the end of the feast, a cow is sacrificed, for which a sacred stone is used.

Look for more photos of Bodi tribe from Daily Mail