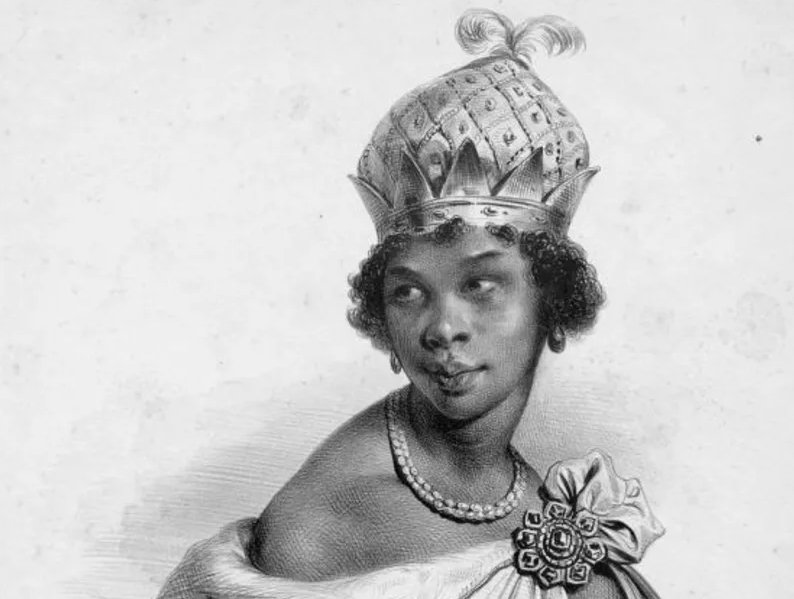 Queen Nzinga was the leader of Mbundu people. During her reign as the the leader, she fought against the Portuguese and their expanding slave trade in Central Africa.

During the late 16th Century, the French and the English people threatened the Portuguese where they (Portuguese) enjoyed near monopoly on the sources of slaves along the coast of West Africa, forcing Portuguese to seek new areas of exploitation by going further south. By 1550 they had already established a trading relationship with Afonso I in the nearby Kongo Kingdom. They then turned to Angola, south of Congo.

The Portuguese established a fort and settlements at Luanda in 1617, encroaching on Mbundu land. They later in 1622 invited Ngola (King) Mbande to attend a peace conference there to end the already encountered hostilities with the Mbundu. Instead of attending himself, Mbande sent her sister Nzinga to represent him in the meeting with the Portuguese governor Joao Corria de Sousa. Nzinga was aware of her diplomatically awkward position. She was well aware of events in the Kongo that led Portuguese to dominate the independent Kongo kingdom, to cooperate for the sake of trade where they were getting guns as a result of trade.

In the first series of meetings, Nzinga sought to establish herself as equal with the representative of the Portugal crown. In the room, only one chair belonged to Governor Corria was present, it was designed as such in a show of contempt to Nzinga, she immediately motioned to one of her assistants who fell on her hands and knees and served as Nzing’s chair for the rest of meeting.

Nzinga made accommodations with Portuguese despite her display to them. She converted to Christianity and adopted the name Anna de Souza. She was baptized in honor of the governor’s wife who also became her godmother. She later tried to convince a reluctant Ngola Mbande to order a conversion of his people to Christianity.

Despite repeated attempts by the Portuguese and their allies to capture or kill Queen Nzinga, she died peacefully in her eighties on December 17, 1663.

Today, Nzinga can be felt all through Angola. A street in Luanda is named after her, the National Bank of Angola issued a series of coins in tribute to her role in defending her people, and the government placed a statue of her in Kinaxixi in 2002 to celebrate the 27th year of Angola’s independence. It’s an honor for women in Angola to stand next to her statue during weddings or special events surrounding women.