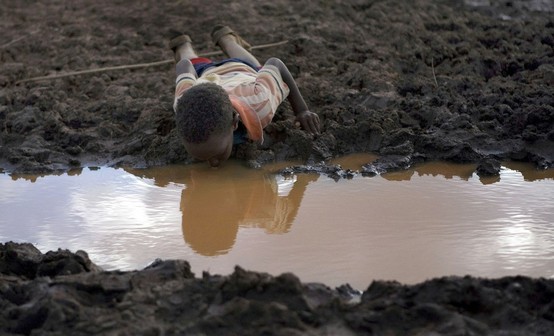 About 1.5 billion people are suffering severe water scarcity or drought related calamities, with combination of climate change effects. Rising demands of water and agricultural produces has attracted cartels and corruption that seek to profit from the situation, making it hard to the most vulnerable people to access these basic needs, vital for survival.

In November UN warned that billions of people would face hunger and chronic food shortages as a result of failures to conserve water resources, and to tackle climate change crisis.

50 million people in sub-Saharan Africa live in areas where there is constant severe drought on cropland and pastureland once every three years. Frequent drought affects 10th of the world’s rainfed cropland and about 14% of the world’s pastureland. Rainfed agriculture represents 60% of global crop production, and 80% of land under cultivation. 60% of the irrigated cropland around the world is highly water stressed.

In Africa, water scarcity is the primary cause of conflict in some regions with communities fighting over little available water resources especially in Sudan, Chad, Central African Republic and Mali because of fast expanding Sahara desert.

The most affected people in sub-Saharan Africa, are women and young adults as they spend most of their time in a day fetching water over long distances of up to 12 kilometres per day, this means other economic activities and education are not given time. This indicate that lack of water perpetuates the cycle of poverty.

Water shortages have negative effects on health and hygiene. Over 800 children under the age of five die every day from illness related to poor sanitation and quality of water.