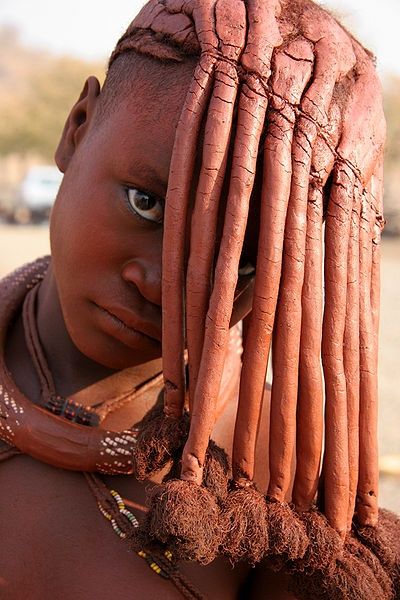 The Himba of Namibia and Angola

Language: Otjihimba, a dialect of the Herero language.

They are found in Namibia and Angola.

The Himba (singular: Omuhimba, plural : Ovahimba) are ancient tribe of Namibia, they are closely related to the Herero.

They are semi-nomadic, pastoral people who keep cattle and goats.

The sign of wealth in Himba culture is owning a lot of livestocks, represented by horns on the grave.

Despite them being plagued by severe droughts, guerrilla in Namibian war of independence and Angolan civil war, and German forces that decimated other groups in Namibia, they have persevered and their culture and tradition remain.

The women are famous for rubbing their bodies with otjize ,a mixture of butter fat and ochre, believed to protect their skins against the harsh climate and to determine the difference between men and women. The red ochre are applied when the girls are old enough to look for themselves hygienically.  The red mixture symbolises earth’s rich red color and the blood that symbolises life. Men do not rub themselves with otjize.

The Himba worship their ancestors and the god called Mukuru. The ancestors act as Mukuru representatives because Mukuru is always busy in a distant realm. They communicate with their God through the Holy fire. The smoke of the Holy fire rises toward heaven, which enables them to communicate with their ancestors who directly contact the Supreme being. You’re not allowed to close the holy fire  if you are an outsider, or uninvited.

Women are not allowed to use water for washing. This implies also their clothes. This date back to the great droughts where water was scarce, and only men were allowed to access water for washing purposes. Himba women do take a daily smoke baths to maintain personal hygiene.

You will be offered a wife as a visitor, if you’re an esteemed guest, under the practice known as Okujepisa Omakazendu which means “offering wife to guest.”