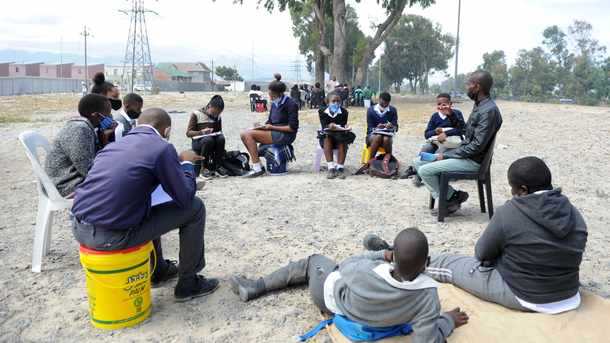 480 pupils being schooled under trees

Schools from across the country in Kenya resumed their studies on January this year, not all learners were advantaged as some had to learn under the trees as schools fight to maintain Covid-19 protocols of social distancing.

Kenyan Cabinet Secretary was quoted saying teachers should be innovative in accommodating all learners, he defended this situation of learners studying under the trees saying they are healthy as outside classrooms contain more oxygen which is good for learning process.

He however, faced criticism from sections of Kenyans after he made remarks which he came out strong to defend.

Today, a number of schools have settled into ‘new normal’ which of course is necessary to control the spread of coronavirus.

In South Africa, parents have opened a school under the trees for children who couldn’t be placed for the 2021 academic year, Daily Voice has reported.

The school with 480 learners which is named Empumelelweni Primary and High School is situated in Eerste River and consist of five classes.

The school has no furniture and children have to bring their own crates and buckets to use as chairs.

The school has five qualified teachers who are all volunteers.

School principal Zolile Velebhayi says :“We will make sure the children will get quality education.

“And we hope that soon we will have at least containers and the kids can be indoors.”

He says the new residents in the area would like their kids to go to nearby institutions, but the Western Cape Education Department has told them to go to schools in Khayelitsha instead.

“The learners’ parents are beneficiaries of a new housing development and recently moved to Eerste River, but some were backyard dwellers in the area,” explains Velebhayi.

“All the children here are disadvantaged and some are disabled.”

He says parents couldn’t afford transport money to send their children back to their previous schools.

“We have approached the department since last September. We tried to negotiate with them so they could come up with a plan for us, but nothing positive came out of it,” he says.null

“Instead we were told to take the kids to Homba Primary School in Khayelitsha and the parents are not comfortable with that.”

Velebhayi tells the Daily Voice the department also promised a bus for the learners but said the parents were concerned about safety.

“Our request to the government is for space or a site for the children so they can have a proper school,” says the principal.

“It’s puzzling that when Forest Village was planned, it was just for housing and no site for schools.”

Nolizwe Ndikandika, 57, says her grandchild is attending Grade 1 at the outdoor school.

“We decided not to protest and demand a school for the children. Instead we decided to find an empty space so our kids don’t miss out on education,” she says.

“The bus that would have transported the learners to Khayelitsha was not a good idea, there are small children in Grade R. Who would have taken care of them?”

The ouma says containers would help with the situation: “Winter is coming and we are going to need a warm place for our children.”

The WCED says the school is operating illegally.

Spokesperson Bronagh Hammond said: “The community has allegedly created an illegal school, in an attempt to strong-arm the WCED into building a school. The WCED has been confronted by similar attempts like this in the past, where certain teachers are vying for jobs through this kind of action by community members.”

She said the WCED offered various alternatives for the primary and high school kids.

“Every offer was denied, or it was on condition that we use their ‘existing teachers’ and create a ‘new school’ on the premises of another,” Hammond said.