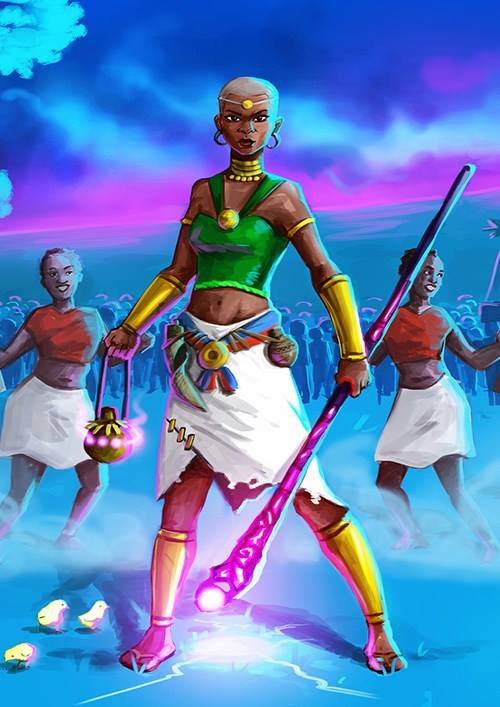 Mekatilili wa Menza was a Kenyan fearless leader, who led her people, the Giriama people to resist the British against exploiting them.

She was born in Mutsara wa Tsatsu between 1840 and 1860. She was the only girl among five children and was named Mnyazi wa Menza (Mnyazi, daughter of Menza) by her parents. She was named Mekatilili after her son Katilili now me –mother of Katilili.

When she was a young girl, her grandma used to tell her the tales about the coming of white men which were foretold by a Midzi-Chenda a Mijikenda prophetess named Mepoho. She knew from the prophecy the foreigners would come to oppress her people, destroy their culture, but a woman will stand for them.Photo Courtesy of Rich Allela

Mekatilili interacted with Arabs and British in Malindi and great market near Kilifi trading with them. Her resentment towards foreigners was triggered by her personal tragedy which has been attributed as being responsible for forced labour and oppression.

During her trading visits, Mekatilili saw one of her brother named Mwarandu taken captive by Arab slave merchants, this left deep psychological scar on her.

Traditionally married to Dyeka wa Duka in Bungale, Mekatilili was an active and prominent member of traditional women groups in the community such as Hifudu and Makushekushe which she rose to head later on. Following the death of her husband, she had more freedom as a woman leader to move around and rally the people.

Mekatilili had great oratory skills and along with her charisma and bravery she led public meetings called baraza, mobilizing the men to take oaths and make sacrifices to restore their sovereignty. At a baraza in August 1913, Mekatilili got into a heated argument with the British administrator, Arthur Champion whom she slapped!

Swiftly, the Giriama men rallied to defend their heroine and were ready to deal with the British official who was taken away. The British responded by firing shots at the gathering crowd. Realizing their initial miscalculation in underestimating Mekatilili’s influence, the British plotted and succeeded in arresting her along with Wanje wa Mwadorikola on October 17, 1913.

Mekatilili and Wanje, a male activist were sentenced to five years imprisonment and were taken to Kisii, about 1,000km away. However in April 1914, the pair escaped and found their way back home, which was a big shock to the British who could not understand how a woman could have walked the distance and through a thick forest and survived the wild animals.

Mekatilili continued where she had left off and this ultimately led to the Giriama uprising of October 25, 1914 where many Giriama people were killed by the British who also burnt Kaya Fuongo, the spiritual capital of the Giriama. Mekatilili was re-arrested and sent this time up north near the border area with Somalia.

Although the British had the upper hand, they were unable to gain total control and eventually, yielded to the demands of the Giriama people. Mekatilili returned five years after the revolt. She died at around 1925. However, it was not until October 20, 2010 at the celebration of the first Mashujaa (Heroes) Day that the legendary woman was honored and recognized among Kenya’s freedom fighters!

The government erected her statue at Uhuru Gardens in Nairobi which was renamed Mekatilili wa Menza Gardens.