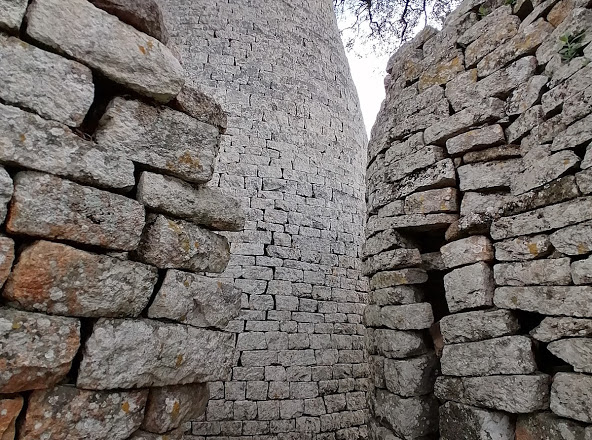 The Great Zimbabwe is an ancient City that flourished around 12th to mid 15th centuries in Zimbabwe near Lake Mutirikwe and the town of Masvingo. The Kingdom which the city served as headquarter is subject to controversy. The city is believed to have served as Royal Palace for the local monarch. The city was constructed without mortar, and eventually the city was abondoned and fell into ruin.

The whole site shows the centuries-old drainage system which still work today, funnelling water outside the houses and enclosures down into the valleys. The city’s buildings were made of impressive granite walls, embellished with turrets, towers, decorations and elegantly sculpted stairways. An enclosure 250 metres high, was crafted with 900,000 pieces of professionally sliced granite blocks, laid on each other without any binders. Its perimeter columns were decorated with soapstone sculptures of a silhouetted bird with human lips and five-fingered feet.

2,000 goldsmiths and numerous potters, weavers, blacksmith and stonemasons lived here. Stonemasons would heat large granite rocks in a fire before tossing water on the red-hot rock. The shock of cold water cracked the granite along fracture planes into brick-shaped pieces that could be stacked without the need for mortar to secure them. Millions upon millions of these pieces were produced in the plains below and hauled up the hill, as the city constantly expanded.

The construction of the city began in the 11th century and continued until it was abondoned in the 15th century. The edifices are believed to have been erected by the ancestors of Shona people.

The City covers an area of 7.22 square kilometres(722 hectares) , which could have accomadated up to 18,000 people at its peak. It is recognized as the World Heritage site by UNESCO.

The controversies surrounding the the Great City of Zimbabwe

The Portuguese sea captain, Viçente Pegado, was the first foreigner to encounter the site in 1531. He wrote at the time: “Among the goldmines of the inland plains between the Limpopo and Zambezi rivers [is a] fortress built of stones of marvellous size, and there appears to be no mortar joining them … This edifice is almost surrounded by hills, upon which are others resembling it in the fashioning of stone and the absence of mortar, and one of them is a tower more than 12 fathoms high.”

In the 20th century, the ruins was subject to looters by European treasure-hunters, who came searching artefacts that were eventually sent to museums throughout Europe, America and South Africa.

The Great Zimbabwe was said by German Explorer Karl Mauch to be the replica of Queen of Sheba’s palace in Jerusalem. Karl Mauch, who visited the site in 1871 refused to believe that indeginous Africans could have built such an extensive network of monuments.

Like other Great civilisations buildings in Africa that racists deny that natives Africans had no capacity to build anything of significance, some European writers believed the Great Zimbabwe was built by Portuguese travellers, Arabs, Chinese or Persians. Another theory was that the city could have been built by the southern African tribe of ancient Jewish heritage, the Lemba.

The indeginous people living around the site were said to believe that the city was built by demons or aliens due to its impressive size and perfection of its workmanship, adding to the mystery of racists theory.

The famous British mining magnate and coloniser, Cecil Rhodes financed archaeologist James Theodore Bent ,who was sent by the British Association of Science with instructions to “prove” that indeed the Great Zimbabwe civilisation was not built by native Africans.

The government of Ian Smith, Prime Minister of Southern Rhodesia (Today’s Zimbabwe), continued the colonial falsification of the city’s origins in an official tour guide books until 1979, of which showed images of Africans bowing down to the foreigners who had allegedly built the Great Zimbabwe.

When Robert Mugabe became Prime Minister of the country in 1980, he renamed the country “Zimbabwe” which means in Shona language ‘remains’ or ‘venerated houses’, in honor of the Great Zimbabwe civilisation and it’s famous soapstone bird carvings were depicted in the new national flag.

With no written documentation about the Great Zimbabwe, much is still unknown about the city. Zimbabwe’s history is derived from archaeological evidence found on the site and oral history of the local Shona people.

Richard Nicklin Hall, destroyed a significant part of the site, claiming he was removing the “filth and decadence of the Kaffir occupation.” In his search for signs that the city was built by non-Africans, layers of archaeological deposits of up to four metres deep were lost.

Reconstruction attempts by Zimbabwe’s nationalists since 1980 have caused further damage-as have some of the roughly 20,000 tourists who visit the site every year, climbing the walls for thrills and to find souvenirs.

The rise and fall of Great Zimbabwe

More than 4,000 gold and copper mines were found around the site, it was suggested that for three centuries, 40% of the world’s total mined gold came from the area, in addition to an estimated 600 tonnes of gold. Thousands of necklaces made of gold lamé have been discovered among the ruins.

It’s prosperous was as results of its position on the route between the gold producing regions of the area and ports on the coast of Mozambique. It became the heart of an extensive commercial and trading network. The main trading items being gold, ivory, copper, tin, cowrie shells, cattle etc. Imported discovered in the ruins included glassware from Syria, a minted coin from Kilwa and assorted Persian and Chinese ceramics.

The prosperity of Great Zimbabwe continued until the mid-15th century, when the city trading activities started to decline and it’s inhabitants began migrating elsewhere. The most common hypothesis that explain the abandonment of the city is, pastures, natural resources and food shortages. The real reason still remains unclear.