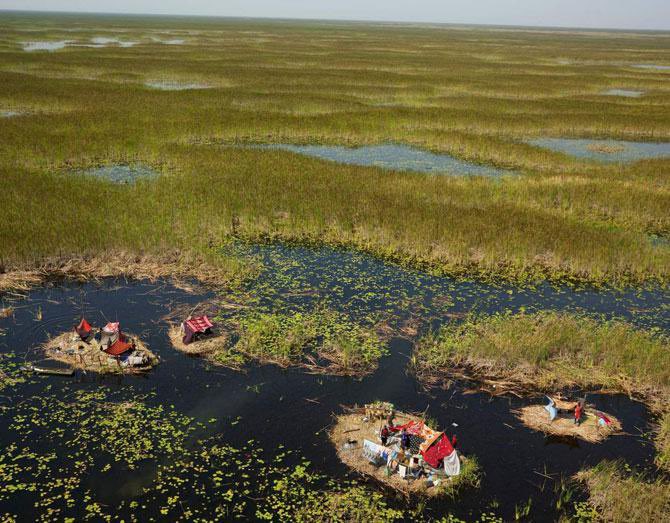 The largest wetlands in Africa, Sudd.

Sudd is the largest wetlands in Africa and second in the world, with an estimated area of 57,000 km², located in South Sudan. The extent of Sudd wetlands depends on the seasons and yearly. During wet seasons the the size of this wetland increases up to 90,000km² and gradually decreases to about 42,000 km² depending on high seasonal floods.

Sudd wetlands is the products of White Nile ( or Bahr el Jewel) that comes from Lake Victoria in Uganda in addition to rainfall runoff from the surrounding areas.

Sudd wetlands also host and act as breeding ground for a number of inter-African migratory birds and others that come from Europe and Asia, such as Great White Pelican (Pelecanus onocrotalus), Back Crowned Crane (Belearica pavonina), White Stork (Ciconia ciconia) and black Tern (Chlidonias niger).

The culture and society of the approximately 1 million people inhabiting the Sudd wetland region are closely linked to its ecological functioning. The dominant cultural affiliations in the Sudd are the tribes of Nuer (Southern Liech State), Dinka (Eastern Lakes state), Shilluk (Upper Nile State) and Anyuak (Akobo State) all of which are Nilotic and pastoralists peoples indigenous to the Nile Valley. These groups have developed traditions that have allowed them to adapt to the inundated and seasonally variable conditions across the Sudd through a combination of nomadic agro-pastoralism, non-timber forest product collection and fishing. Specific practices include the seasonal construction of settlements on small islands in flooded areas, and traditional hunting and fishing techniques. The hydrological functions and patterns of the Sudd maintain the livelihoods and cultural practices of the Sudd’s tribes.  The cultural groups living within the Sudd region also maintain beliefs and practices that serve to support and conserve the environment they live in. For example, the cultural beliefs of the Shilluk community living within the Sudd region are an important aspect in the preservation of the Nile lechwe (antelope species endemic to South Sudan) as they consider killing of the animal species as taboo, and this of course helps in their conservation and sustainable use. It is therefore valuable to support many of the cultural practices of the communities living in the Sudd as these are closely intertwined with the natural elements and preserving them also creates and maintains an awareness of past and traditional knowledge in the general public.

In 61 AD, Roman Emperor, Nero, sent solders to White Nile but they were unable to proceed beyond Sudd which limited the Roman penetration to equatorial Africa.

2019 study suggested that increased water flows into Sudd may be partly responsible for causing up to a third of the whole West African rise in atmospheric methane levels over the past decades.