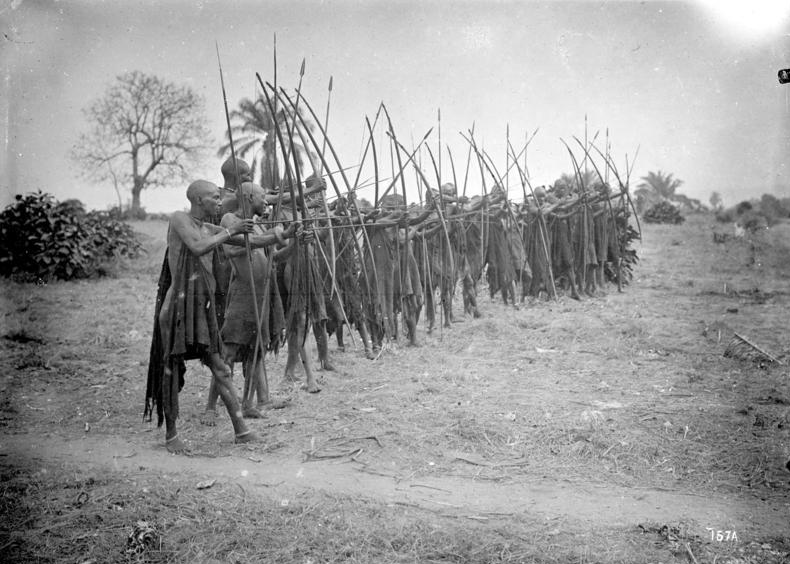 During colonialism in Africa, Africans reacted differently to European colonizers. There are those who choose to resist even before the introduction of colonial rule in their territories, examples being Nandi of Kenya and Mandinka in present day Mali, others revolted against the already established rule examples being Zulu led by Chief Bambatha.

There are so many Africans who resisted and who collaborated, but these are few, which are famous throughout Africa.

Here are the Africans who resisted European colonialism;

Mbundu, are also called Kimbundu, are the second largest ethnolinguistic group of Angola comprises a range diversity of people who speak Kimbundu, a Bantu language. They are among the earliest recorded people to have encountered by Portuguese during slave trade era  circa 1500s where under the Queen Nzinga resisted the Portuguese. Read more about queen Nzinga here.

Portugal would later come to colonize what is now Angola, under the Paulo Dias de Novais.

After the Berlin Conference of 1885, France began to enter in West Africa more aggressively. Samori Toure is among the African leaders who responded by resisting the French colonialism in Mandinka Empire. Samori knew French’s ability and so he equipped his army with modern British weapons where he expanded his empire to present day Liberia.

French however, persisted with their incursion into the Mandinka Empire where they seized the city of Kankan, and despite a series of evasive maneuvers by Samori Toure, the French finally succeeded in capturing the Capital Bissandugu in 1892.

Samori Toure withdrew his army and people to the east of the former empire. He established a new empire far in the interior with new capital at Dabakala. Due to this location, Samori was not able get guns from the coast to equip his army. He was unable to control the gold mines which had previously contributed to the wealth of the empire.

There was more fighting between the French and Samori between 1896 and 1898. Samori was eventually defeated in 1898 and imprisoned in Gabon, where he died in 1900.

The Agiriama resistance was led by Mekatilili Wa Menza, she wanted to prevent any Giriama laborer from being employed by the colonial authorities. She was also concerned about the growing of British influence in the region.

When Arthur Champion held a public meeting where Mekattlili was present and tabled his demands, Mekatilili was very agitated as this meant to erode Giriama’s culture. She later organized an uprising which failed and she was arrested in 1913.

The Hehe rebellion is one of the famous ant-colonial rebellion in East Africa. Hehe are Bantu ethnic group of Tanzania. The Hehe rebellion is seen by Historians as the precursor of the infamous Maji Maji Rebellion. The rebellion took place in 1891 during the reign of Chief Mkwawa. Mkwawa was seen as brutal who came to power through war and intimidation. The Hehe spared no one in their surroundings including Germans and their supporting local tribes. It is here when serious conflict broke out between Germans and Hehe. It became obvious that WaHehe were sabotaging German’s ambitions of building stations around central Tanganyika. On August 17, 1891 Julius von Soden, the then governor of German East Africa authorized an attack by the Germans to Wahehe. The planned attack was headed by Zelewski the then German military commander. What followed was historical defeat of the Germans by the Wahehe as reported by ‘A Modern History of Tanganyika by Holger Doebold and Lt. Tettenborn’s official report.

After Governor Freiherr von Schele succeeded from Soden , he tried to negotiate with Mkwawa, which failed and their caravans continued to be attacked by Wahehe. Many Wahehe were killed for aiding Mkwawa, which led people to isolate him. Eventually Mkwawa was captured in July 1898. Mkwawa shot himself after he was cornered.

The Abushiri revolt was an insurrection happened between 1888-1889 by the Arab and Swahili population of the areas of the coast of East Africa against Germany which was granted to by Sultan of Zanzibar in 1888. This revolt was successfully suppressed by German expeditionary corps which conquered the coastal area. Read more about Abushiri revolts

The Nandi were the fiercest people when it comes to resisting the British influence in Kenya. They were united under the leadership of Orkoiyot. When Koitalel Arap Samoei took over as a leader, he was determined to defend their independence, protect their land and animals, and to protect their ways of life which they feared British will interfere with. The Nandi, therefore, did not allow any strangers across their country. It is there that they killed Peter West, a European who tried to go through. When the railway line reached the Nandi region, the warriors kept on attacking the workers and removing the iron bars and telegraph wires. The Nandi were able to resist British for a long period because; they had well trained warriors organized in groups, their forested and hilly country, enabled the warriors to hide, attack secretly and disappear quickly into the bushes (guerilla warfare), Europeans were not familiar with the country, the Orkoiyot kept on encouraging the warriors. In October 1895, the British led by the commander, Meinertzhagen decided to defeat the Nandi once and for all. He pretended to arrange for a peace meeting with Samoei. As they greeted each other, the Orkoiyot and those who accompanied him were shot dead. The sudden shocked the Nandi. They lost hope and eventually surrendered. The Nandi were moved far away from the railway line and lost some of their land to British settlers.

The Ababukusu are Abaluyha sub-community occupying Bungoma county. The reasons why they resisted British are; they wanted to maintain their independence, protect their land, they were encouraged by their leader Mukire wa Namene and they also feared that the British might interfere with their own way of life.

Their resistance goes back to 1894. They were punished by the British for supposedly hiding six deserting soldiers armed with rifles. At Chitambe Fort, where the Ababukusu sought refuge, hundreds of their warriors and ordinary people were shot dead. By the end of 1895, their resistance was weakened. By 1908, they were completely defeated and bowed to British terms.

The Battle of Adwa

The battle of Adwa, was a military clash at Adwa in Tigray region between Ethiopian army led by Emperor Menelik II and Italian forces. The Ethiopian victory on March 1, 1896, checked Italy’s attempt to build an empire in Africa. The victory was the first crushing defeat of a European power by African forces during colonial era. As a result, Ethiopia remained the only African country uncolonized together with Liberia, even though the country was briefly occupied later by Benito Mussolini. Details

In 1877, Lord Carnarvon, Secretary of State for the Colonies, wanted to extend British Imperial influence in South Africa by creating a federation of British colonies and Boer Republics. He appointed Sir Bartle Frere as British High Commissioner there to execute his plan.

Carnarvon’s policy required Frere to gain control over Zululand, warrior kingdom bordering Natal and the Transvaal. King Cetshwayo refused Frere’s demands for federation, or to disband his Zulu army, as it would mean losing power.

War began in January 1879, when force led by Lieutenant-General  Lord Chelmsford invaded Zululand to enforce demands. Because Cetshwayo understood the British’s army superiority, he started buying guns before the war. The Zulu had now thousands of old-fashioned muskets and a few modern rifles at their disposal. However, Zulu warriors were not properly trained to use them.

Most Zulus entered the battle with only shields and spears. However, they still proved a formidable opponents against the British army. They maneuvered with great skill and were adept in hand-to-hand combat.

After series of defeat of British army by Zulu army, the British government was concerned and there was possible replacement of Lord Chelmsford which was called on by Sir Garnet Wolseley. So he made final attempt at the battle of Ulundi, where King Cetshwayo was hunted down and captured and his possession were seized, he was sent to exile in Cape Town and later London.

The British continued to make their way to Bulawayo, however, they were initially thwarted by a frontal attack by a better organized and decisive Matabele force at Bembesi on 1 November. This was the most decisive battle of the 1893 Matabele War. The frontal assault demonstrated the courage of the Matabele. The Matabele forces was large, 80 000 spearmen and 20 000 riflemen, against fewer than 700 soldiers of the British South Africa Police, but in the end the Ndebele warriors were no match against the British Maxim guns.

Lobengula fled after the defeat at Bembesi, but not before burning his capital of Bulawayo to the ground rather than allow it to be captured by the British. On 4 November the British captured the smothering ruins of Bulawayo. A detachment of troops under Major Alan Wilson were sent to pursue Lobengula, they followed him across the Shangani River on December 4, but they were cut off by the king’s amabutho. Efforts by Commanding Officer Forbes’ column to re-enforce the patrol were too little and too late. The ensuing battle and eventual loss of 34 white soldiers became known simply as the Shangani Patrol. However, by this stage the Ndebele had lost. This story is on South African History Online

The First Chimurenga took place from 1896-1897, first in Matabeleland and then in Mashonaland. The reasons for this uprising are a point of debate, as well as how this uprising was carried out by the Shona and Ndebele people. The primary point of debate begins with Terence Ranger’s portrayal of the First Chimurenga as a “supra-tribal” uprising led and organized by the spirit mediums and political leaders, which were the beginnings of a “national consciousness.” Later arguments presented by historians such as Julian Cobbing and David Beach hold that the First Chimurenga was actually a series of fragmented uprisings that were not rooted in nationalism. Refer here