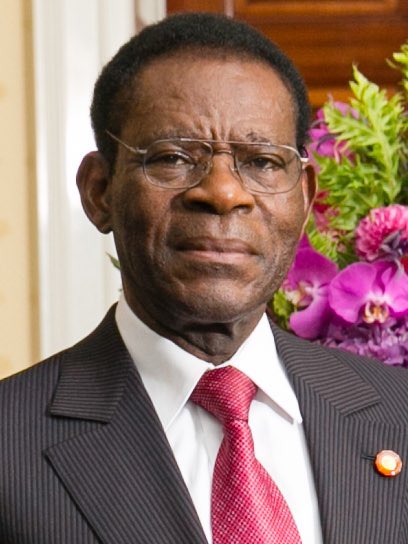 Teodoro Obiang became president of Equatorial Guinea in 1979 from a bloody military coup that ousted his uncle from power, Francisco Macias Nguema. Obiang oversaw his country becoming an important oil producer from 1990s.

When Macías ordered the murder of several family members, including Obiang’s brother, Obiang and other family members in Macías inner circle feared the president was insane. He responded by overthrowing his uncle in a bloody military coup and placed him on trial for his actions, including the genocide of the Bubi people. Macías was found guilty and executed by firing squad on 29 September 1979. He declared that his government would become more lenient from previous repressive regime of his uncle. He granted amnesty to political prisoners and ended forced labour which was practised by his uncle’s regime. Under his uncle, he too committed multiple crimes, however, he mentioned non of such crimes while mentioning other crimes.

The country returned to civilian rule with introduction of less authoritarian constitution.

He was elected for seven years in 1982 as the sole candidate in a ballot poll. In 1989 he was re-elected again as the only candidate. In 1992, 1996, and 2002, he organized elections with other parties allowed to participate and won by 98% of the votes. The elections were condemned as fraudulent by international observers. To some districts, Obiang was elected by 105% of registered voters. He was again re-elected in 2009 with 97% of the votes casted amid accusations of frauds. He constantly intimidated opposition leaders and beating them.

Obiang’s rule was considered more humane than that of his uncle’s, however, he increasingly became more brutal. Equatorial Guinea is considered one of the most oppressive, corrupt, ethnocentric and undemocratic states in the world. The constitution grants Obiang sweeping powers , including ruling with decree.

In 2003, a state owned radio declared Obiang “the country’s god with all powers over men and things.” The statement continued by saying “the president was in permanent contact with Almighty ” and he can decide to kill without anyone to account him and without going to hell.” He personally made similar sentiments in 1993. It is worth noting that his uncle proclaimed himself as god too.

Obiang cult of personality, like that of Mobutu, has been rooted to the deep of the state. The public speeches end in wishing him well rather than the state. Many important buildings have a presidential lodge, many towns and cities have streets commemorating Obiang’s coup against Macías, and many people wear clothes with his face printed on them.

A self declared ‘boss’, Obiang and his predecessor are among the Africa’s bad lucks ever walked on this continent. He is known to practice nepotism with his son as his vice-president, together there is  widespread public funds embezzlements, killings by security forces, government kidnappings, systematic torture of prisoners and detainees by security forces, life threatening conditions in prisons and detention facilities. The country is riddled with alot of impunity, arbitrary arrests and detentions. There is reduced freedom of association, the few private media outlets are largely owned by Obiang’s close relatives.

Equatorial Guinea has the highest purchasing power in Africa and 31st in the world as of 2017 with more than $38,699.